Rich from IGN has posted on his twitter that the Wii U has made it to there office, He has embargoes of course which include the User Interface and such. But they will be doing an Unboxing video which will be publish at 10 AM PT.

HeyHeyHarold wanted me to post this for him since he was on an android phone. 
CloudBerry is a game that is coming to Stream and the Wii U as well. It also stated that the game is planned to arrive on December.

Shane Shatterfield who is Editor of Chief said this during Invisible Walls:

“One thing that I can say without getting in any trouble is that the launch line-up for the Wii U is going to surprise people. It’s going to be pretty damn good.”


He may have insider info about the planned Wii U Launch titles which could mean Nintendo are planning to announce the launch line up at E3. What he means of "Pretty damn good" is subjective but it is very encouraging to see this about the Wii U.

According to these report there was a leak of box art for Crysis 3 for the xbox 360 and PC. Here they are 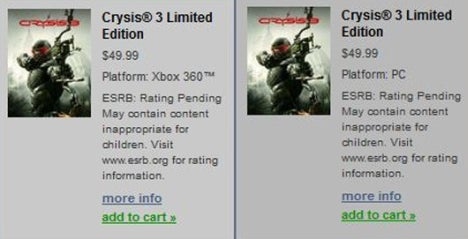 You can see in the cover are that the character is holding a Compound bow. The box art has been removed of the site but people have been able to see a link for it on Google.

It is said that Game reactor magazine's new issue which is to come out next month will be the proper reveal for the game.