What games would make the NX launch successful?


16 replies to this topic

Obviously Nintendo needs to actually market this console and make sure people are aware it exists, but what games do you think would help the NX be successful at launch?

A new IP on the same level of quality as Splatoon

Literally anything except a New Super Mario Bros title

Be nice to see Monster Hunter grace a Nintendo home console once again. I don't know of any games specific, but it needs big hitters from a few of it's franchises right out of the gate peppered with other exclusives and some 3rd party. Also, a new IP, or something brought back from the dead.

The new Zelda looks like it will be on the NX also, so that alone will be very appealing for many people 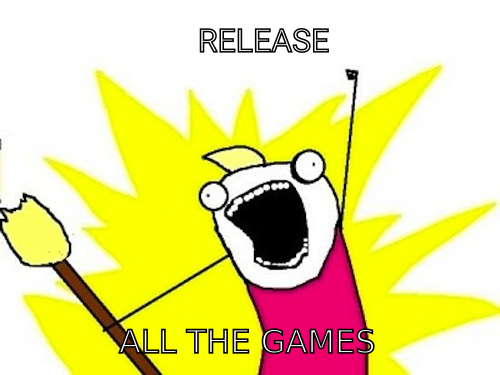 But honestly we really need a proper Zelda and Mario 3D game, and probably a Splatoon sequel. At launch. Not having a decent lineup at the launch of the Wii U had a pretty bad impact on it. It would also be great if Nintendo could work with some of the more famous indys to port their games over, like Undertale.

With that many Sega titles you'd think it was the Sega NX. If only, if only...

New Metroid = day 1 buy for me and a lot of dedicated gamers.

That would still mean Wii U was the only home console that didn't have an exclusive Zelda title. Nintendo like their traditions, they are japanese after all.

A proper Metroid at launch would go a long way.  The most obvious choice.

I wouldn't mind finally getting a new f zero, but I guess Fast Racing Neo will have to fill the void because Nintendo don't care.

Personally I'd love the Custom Robo to series to come back, but if F Zero is a pipe dream, than CR is never in a million years.

I figure Star Fox is off the table since we are already getting one next year.

New Fire Emblem.  Though that probably won't happen since we're getting fates soon and that SMT crossover.

Some new IP that's a major game, not some small eshop download (we need big stuff).

Be nice to see Monster Hunter grace a Nintendo home console once again.

Well, I wasn't gonna bring it up myself, but...

This would totally justify it for me (big surprise, right?).  NX is rumored to be handheld/console hybrid.  MH3U was on Wii U and 3DS, and you could transfer save data between both.  I feel like this would be the perfect for MH since it wouldn't necessarily splinter the player base like 3U did.  Heck if it ends up being MHXU or whatever the next MH that comes west, that would be phenomenal at launch.  MH is one of a few 3rd party games Nintendo fans seem to receptive to.  (Slightly unrelated, but I wish Nintendo would just buy Capcom already, or at least merge.  Quit with the foreplay you two.)

That all aside, there are two main things they should have learned from the Wii U (I hope):

1. You can't just throw a 2D mario on there and call it good (especially since Maker is out)

I remember that there was a time when topics were created solely because someone saw an advertisement for the Wii U.  Wasn't that hilarious(read: sad)?  I expect the NX to launch and sell much better than the Wii U, if they have in fact learned some things from this past gen.

Super Mario Odyssey is an excellent Mario in 3D that brings a lot of novelty in the gameplay, and is easily placed among the best episodes in 3D adventures of Mario. By cons, I find the game relatively easy compared to its predecessors. That said, this game is a must-have for any switch owner!