hello I need help with a game 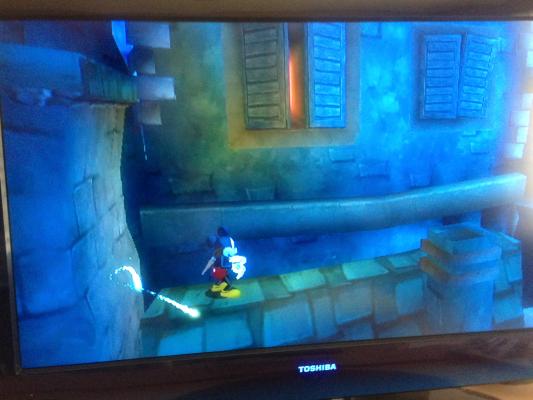 on the Wii U and my Wii U is fine but my game froze in the Disney Gulch Ghost part and I cleaned the disc and put it in and tried it and started the that was fine until i opened my file on the game that I have saved on the game and it started in the same spot and it is in the same spot when you first opened or loaded the file and I can't get it to move on or anything the sound is fine and other stuff but it froze and the only way i can move on is to restart the game and start a new file which I don't really want to so How the heck do I get this fixed? Cause I love this game and if I have to start a new file that's fine but I would rather not!

Thanks
P.S. In this Picture I took of where I am n the game and it's stuck aka froze there and normally Micky would be a lot smaller cause he is going through back in time on one of the old film reels

Welcome! Have you tried contacting Nintendo or the game maker about this?

Hi, I'm Dave. If you wish to add me to your Wii U Friend List, my NNID is elvisdavebeck. Don't forget to subscribe to my YouTube channel: http://www.YouTube.com/user/elvisbeck., where I play Nintendo games and more.

one question can I on this site load a short video so I can show u what is wrong?or where I am stuck on the game on how I get to it

you can put up a video, there's nothing wrong with that as long as you don't start saying sub this channel and check out this website while doing it. Also, this probably shouldn't go in the introduction section.

Back to Introduction Central

Also tagged with one or more of these keywords: wii Game, problem, Help, Disney Epic Mickey 2