The Deer God is an absolutely gorgeous 3D pixel art adventure platforming game that has recently had its goal reached on kickstarter to come to the Wii U and has just been released on Steam. 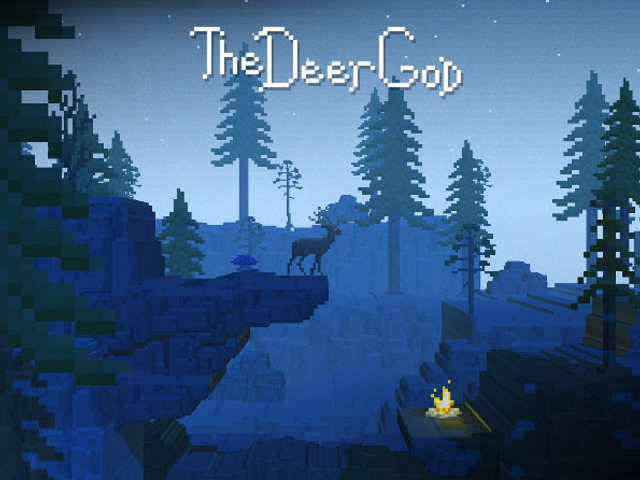 The game focuses on the spiritual journey and self discovery of a hunter who shoots and kills a deal while simultaneously being attacked by wolves, you are then transported to the Deer God who allows you to reincarnate as a baby deer and look at life from another point of view. You traverse a gorgeous pixelized landscape abundant with various terrains and an incredibly beautiful level of visual depth. The game plays out as a game of exploration and discovery, at no point does this game choose to hold your hand and walk you through what to do, much like the overall message of self-discovery the gameplay mechanics itself also focus on self-discovery. You must determine when to run and when to fight, how to use the environment to the best of your advantage when you're in a tight pinch, this game is by no means a typical adventure platformer where you run and attack enemies head on, being a deer you may not desire to attack with brute force unless you have yourself backed into a corner.

Gameplay of The Deer God on Steam:

The Deer God is truly a unique experience that combines the tranquility and relaxation of a soul searching journey paired with the ever increasing difficulty level as the game progresses and I cannot wait to get my hands on the Wii U version!

Cool. I'll be getting this on Steam when it's on sale next. Saw it a while back and told myself that one day I will finally be the deer god. "The Ancient Race of Carve a Day."

I'll be sure to pick it up on the Wii U when it comes out. I don't see what's so unique about it, and the general response to this thread reminds a lot to the response that Goat Simulator had, which doesn't help to improve my initial impression of the game at all.

I'm willing to listen if you elaborate on what makes it so special, but from what I've seen in the video's, it just seems like a bland 2D platformer with an art style that gets boring really fast despite making use of some pretty colors (the fact that you keep seeing the exact same art assets repeated over and over again doesn't help with this at all). Procedural generation (I'm actually not sure if the game makes use of this, but it sure looks like it) doesn't seem to be good enough to create level design that's either interesting or challenging to navigate either, so I don't see much of a point in playing a game with bland level design in a genre where level design is everything.

Again, I haven't actually played the game myself, so I'm willing to listen to anything you have to say in the game's favor, but it just doesn't seem like something I'd want to play.

I really love some artsy indie games like Brothers,rain,Tengami and not so indie like Lost in Shadow. I came in this topic expecting something like that but this is Goat Sim 2d which is trash.

Meh let me know when we get more indie games worth a damn.

wtf did they even try?

Also tagged with one or more of these keywords: The search is probably still, broke but wtf why not, add tags, ..., Jigglypuff