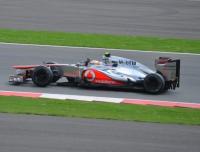 Hi there, and thanks for visiting my profile.

I'm AMAC, the moderator here at TheWiiU.com and I'm a huge Yoshi fan (I don't see how anyone could not like Yoshi if I'm honest). I also like Formula 1, Football, playing video games, and discussing them, here and at 3DS Buzz.

I've also become a fan of My Little Pony: Friendship is Magic and am now a Brony. My favourite character, like most other bronies, is Fluttershy.

That's all you really need to know about me, so I'll just post a picture of my favourite video game character to fill up some space.

#162288 The Economist says China and Japan are going to war soon.

I can't see these two countries going to war. There'll be some more arguing over the coming months over who should profit from the oil that surrounds these islands and then it will most likely fizzle out. If there was a war, the chances are that the big western countries would support Japan. China's economy relies on exports, so it wouldn't risk damaging its trade links with markets like the US over this conflict.

There are a few things I'd like to point out on this issue:
1) Warnings/punishments are an issue between the users involved and the moderating team. There isn't much need for a thread about an individual user's warnings.

2) Unbanning one user because of a thread like this would be unfair on the other users here who have been banned from the chat. I'm not saying Ness won't ever have his ban lifted, but doing so because of this threat would set a bad precedent.

3) I don't want to come across as being arrogant, but I have access to the chat logs and am able to see if users have been repeat offenders, which means that us moderators are in a better position to decide what would be fair punishments when warning users.

4) At the time of this incident, I don't recall any users contacting me to defend Ness. If you think any of the moderating team have been unfair on another user, let us know at the time, rather than several months later.

And make it so that we can choose the colour we want?

Unfortunately, I don't think that would be possible, and if it is, it would take a lot of work to implement. We'll just have blue icons, as it fits with the theme of the site.

The problem with this suggestion I can't really ban users for discussing games. You could try asking them to go to a private chat, but if there are several users who have played the game then they should be allowed to discuss it, and there isn't an option for group private chats. I'd only give out warnings/chat bans if a user was posting spoilers for the sake of annoying others. It's not ideal, but the only real solutions I can think of would be to ask them nicely to refrain from posting spoilers or to leave the chat yourself for a while. If someone posts spoilers simply to annoy other users though, you can report them and I'll look into it.

The pony spam is what I was referring to. The personal slander can refer to several things: one being what you mentioned, another being the onslaught of slander of several members via a personal chat on the users page, another being possible framing of other accounts, another being PM harassment. And the personal information leak refers to when the user who was involved with the personal slander posted detailed personal information they gathered via social network accounts (that the said user sought out themselves) of several users in chat.
The pony spam was met with VERY swift action and stern warnings... The latter incidents have been giving some users a headache over the lack of action from most mods.
I understand that most of the mods and admins have personal lives... but maybe they should choose a staff less busy.

I'd like to point out that when we warn members, we generally keep the warning/punishment between ourselves and the user(s) involved, so although it may not seem like we have done anything, we will have dealt with it, as long as it has been reported. The leaking of personal information case was dealt with shortly after it was reported, although some of the users here should consider being more careful about what personal information they put online. The link to the personal chat has also been removed from that users profile and we're currently looking at how best to deal with it, although we don't have much control over user's conduct on external sites.

My main present this year was a compact system camera, with a few accessories. I also got the usual gifts like socks, chocolate, books and money/giftcards.

A few of you guys have been requesting this since the Wii U was launched last month, so I've now added two new sub forums:
Wii U Hardware Help
Wii U Games and Software Help

Hopefully, this will help to unclutter the rest of the forum from threads about minor issues with the Wii U. I've moved some threads into this section already, although if you see others, please let the moderating team know so they can be used.

I've also changed the name of the Wii U Games section, to Wii U Games and Software, to make it clear that both can be discussed in that section. I considered adding a separate section, but I didn't feel it would get enough use to make it worthwhile.

A template would work well as a guideline for users who aren't sure what to write in their review, but I think it's best for users to be able to write reviews in their own style. If you want, I can add this template to the section guidelines, but I don't think it should be enforced on everyone who wants to write a review.

Several of you have asked for this recently, so here it is: The Wii U Reviews Section! If you have any suggestions or comments about this, then please post them in this thread.

This section should only have one thread for each game, so please check that the isn't already a thread before you create a new one. You can also post reviews from other sites, although make sure you include links if you do so.

I'd like this edition to simply be for posting reviews, so please don't start discussing each game here. Discussion of Wii U Games should be kept on the main Wii U Games section, as we don't want threads here being cluttered with lots of replies.

If you create a new thread, it'd be good to add a ratings poll so that users can get a quick idea of what other users think of the game in question.

If you see any other review threads that have already been created in other sections, please report them so they can be moved/merged in this section.

As the name suggests, this should only be used for Wii U reviews. If this is successful then I'll consider creating a reviews section for other games.

I know that quite a lot of you we're keen for a reviews section a while ago when it was suggested, so if there's still sufficient interest we can have one. I think we'd only have a section for Wii U games (initially at least) as this is a Wii U Forum after all, although I'd consider creating one for all other games later if this takes off.

Edit: I've set up a reviews section now. Only staff can see it at the moment, but I'll open it to all of once it's ready.

Another Edit: I've now made it open to the public. If anyone has any suggestions, feel free to post them.

One of the problems with chat bans is that the ACP doesn't offer me a way to set a certain length to a user's chat ban. Therefore, if I only want to set a temporary ban, I'll need to lift it myself. If I ever ask a member to remind me to lift their ban, it's because I have a lot of other stuff to do, so there is a risk of me forgetting about it if they don't let me know.

As for the rules being harsh on first time offenders, the main issue with the chat is that it's hard for us to moderate as there is often no moderator in there. While dealing with rule-breaking on the forum is quite simple, with the chat, the simplest way to deal with any serious offences is to ban the user from using the chat. In addition to this, before users enter the chat, they agree to the rules, so there isn't any excuse for breaking these rules.

The punishments that are given put for conduct in the chat depend on how serious the rule-breaking was. If you simply made one inappropriate comment, you would most likely get a warning. If you repeatedly break rules you would most likely be banned. These bans are sometimes lifted, although from my experience, users who have been banned often break the rules again and end up being banned within a week. Therefore, unless I specify that your ban will be a certain length, it will be probably be permanent.

I hope that's cleared up how we deal with rule-breaking in the chat.

We could simply turn the Wii U Games section into a Games and Software section, or we could add a software sub-forum. I doubt that there will be a huge amount of discussion on software in the long-term, so I'm not convinced that we should have a dedicated forum to discuss software.

I'm not posting in a particular order, but these are the 2012 films that stood out for me:
- Skyfall
- The Dark Knight Rises
- The Amazing Spider-Man
- Avengers Assemble
- The Artist

Well, everyone seems to be in favour of this, so I've set up a Competions & Matchmaking sub-forum: http://thewiiu.com/f...ns-matchmaking/

#131546 Welcome to the Competitons & Matchmaking section!

Sme of you guys have recently expressed interest in us having a matchmaking section here at Wii U Forums, so here it is! As the title suggests, this section can be used for online tournaments for any console or just general online gaming. This is a bit of an experiment, so if it doesn't get much use I'll take it down after a while.

3) If you're planning on setting up a competition for any game, then you can create a separate thread for it.

If you have any questions/comments/suggestions for this section then please post them here.